Autumn Colors in Nikko: 12 Places that will Take Your Breath Away

During fall, Nikko's landscape transforms into a painting of red and gold. This is our guide to Nikko's best autumn sightseeing! 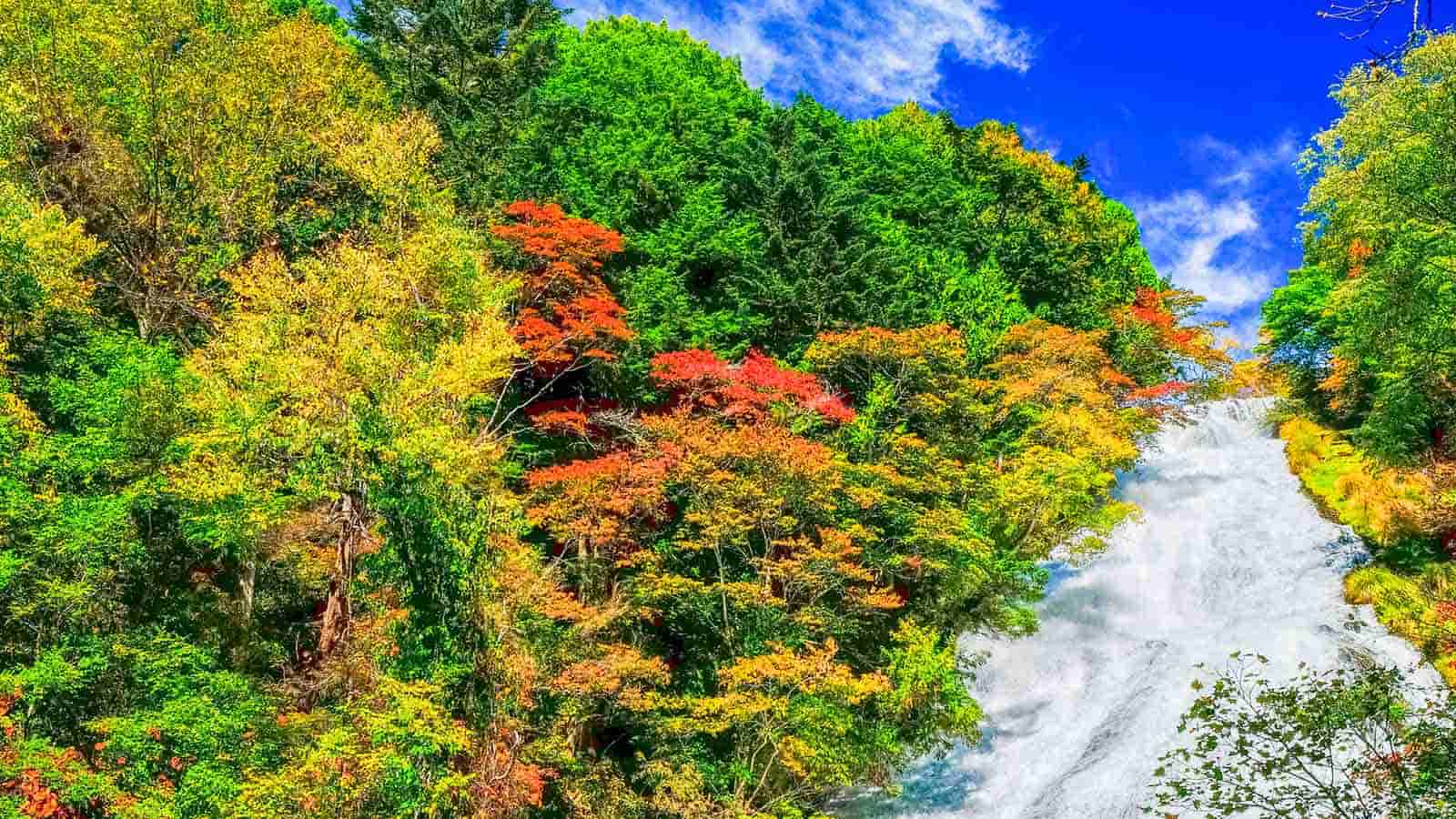 The waterfall at Yugawa pours into Chuzenji Lake, going on for about 210 meters before falling into a plunge basin where it splits into two. The waterfall is named “Ryuzu" (dragon’s head) because the falling water resembles a dragon. There is a viewing platform right in front of the waterfall. The location is also known for having early fall foliage in Okunikko, where the waterfall, situated against the rich mist and an abundance of trees, creates an awesome view.

Places to stay near Ryuzu Falls

Located at an altitude of 1,269 meters, Chuzenji lake is the highest natural lake in Japan. Take a walk around the lake while enjoying the view of Mt. Nikko and Mt. Nantaisan, as well as the view of abundant trees that decorate the lake. We also recommend seeing the foliage from a ferry.

Places to stay near Lake Chuzenji

The waterfall is one of Japan’s three greatest waterfalls alongside Fukuroda Falls and Nachi Falls. The cascade that falls from a height of 97 meters is a truly impressive sight. There is a pay elevator that will take guests close to the waterfall.

Places to stay near Kegon Falls

As a famous tourist spot, “Nikko Irohazaka” has been picked as one of “Japan’s 100 Roads.” The color of the mountains changes subtly on different altitudes, so you can see where the leaves are turning into red. Although the location is stunning to behold, the panoramic view from Akechidaira is simply breathtaking.

A vast marshland created by the eruption of Mt. Nantaisan which accumulated huge amounts of sediment at Yugawa. From June to October, the location has beautiful iris flowers which are usually seen in high altitudes. Beautiful red foliage decorated the marshland last year around late September to early October. The location is suitable for hiking.

Places to stay near Senjogahara Marshland

Marshland located west of Senjougahara. Surrounded by lush Japanese oak and larch, the location has beautiful flowers such as thistle and arctic iris from spring to summer. Seen only during heavy rainy seasons, Lake Odashiro is a wondrous lake that can be seen only once a year.

Surrounded by mountains, the lake is located at an altitude of 1,478 meters. The serene surface of the lake creates a mysterious atmosphere. There is a 3 kilometer trail around the lake that can be walked in about an hour and 10 minutes. The lake is also known for trout fishing.

Places to stay near Yunoko Lake

Located south of Yunoko Lake, the waterfall boasts an enormous size at 70 meters tall and 25 meters wide. The cascade of water that splits while falling from the waterfall creates an epic scenery. The trail above the stairs offers an incredible view.

Places to stay near Yudaki Falls

The symbolic bridge is one of Japan’s most unique bridges. During fall, Otanigawa River reflects the vividly orange-colored bridge and the beautiful red foliage.

Places to stay near Shinkyo Bridge

Considered to be one of Nikko’s three greatest waterfalls, the wa.terfall got its name from the cloud-like mist produced by the water hitting against the rocks. The fall foliage viewing period is from late October to early November

Between Kinugawa Onsen and Kawaji Onsen, a 6 km nature trail follows the Kinugawa River. The white rockface colored by the autumn leaves weaves in and out with the water of the Kinugawa River, drawing many visitors to the splendid autumn scenery. Nijiminotaki (Rainbow-Viewing Waterfall), another one of Ryuokyo's charms, is located a 10 minute walk from Ryuokyo Station.

Places to stay near Ryuokyo Gorge

A valley that extends from Kawaji Onsen to Kawamata. Surrounded by precipitous cliffs that are several hundred meters deep, the valley delivers scenery with true impact. During fall, the valley offers an even more impressive view. The dark, rocky surface contrasts the bright and vivid colors of the red foliage.

Places to stay near Setoaikyo Gorge